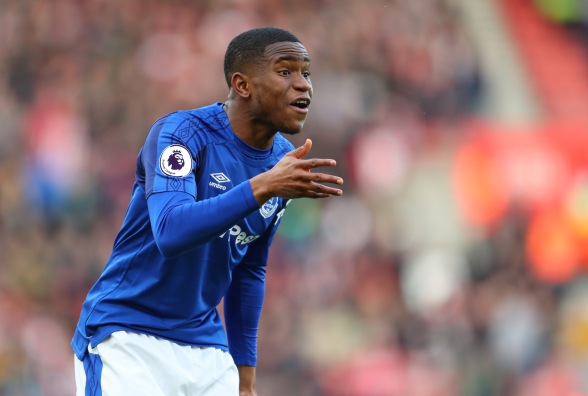 The summer of 2017 was like no other in Everton’s recent history. The club had just finished seventh under Ronald Koeman, and while all the talk was of Romelu Lukaku being sold after the bombshell of him not signing a new contract, Everton were on a huge spending spree.

What followed was the creation of a bloated squad, leading to the need for new manager Marco Silva to offload players, ship out deadwood, and start again under a restructured recruitment drive. Everton want to learn from the mistakes of last summer.

Nurturing youth is at the heart of this new transfer policy. The Blues have already sold Wayne Rooney to DC United, released goalkeeper Joel Robles and offloaded Ramiro Funes Mori to Villarreal, while the future of Kevin Mirallas remains uncertain after he returned to pre-season training following his loan spell at Olympiacos.

These players have served Everton well at times, but they won’t be those who take the club onto the next level. 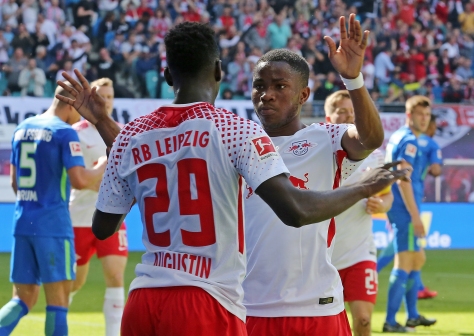 There are likely to be more departures as Silva shapes the squad in his image but in rejecting RB Leipzig’s starting bid for Ademola Lookman, the Portuguese has given the first indication that he is ready to make use of the talent already at his disposal.

And Lookman has plenty of talent. Quite often under David Moyes, it was said that on leaving Everton, the only way was down. But Lookman can quite reasonably argue that his career has stalled since his £10m move from Charlton in January 2016.

His impact was immediate, coming off the bench to score in the memorable 4-0 win over Manchester City, the highlight of Koeman’s tenure, but he was subsequently mismanaged and under-appreciated at a time when fans were craving the sight of a young Englishman in the side.

Everton were in no real danger of being relegated, out of all three cup competitions, and still licking their wounds from the worst Europa League campaign from an English side ever. Giving Lookman – who had shown his undoubted ability in the 3-0 win over Apollon Limassol in December – half a season to make the left side of midfield his own was denied.

But, unlike those who looked elsewhere often under Moyes, the youngster chased down a Champions League berth at RB Leipzig and thrived away from what was known to be a tense environment at Finch Farm.

Silva has belatedly arrived at the club and his first port of call has been to assess his squad, but streamlining was a necessity, freeing up funds with the removal of players beyond their peak from the wage bill.

Everton plunged an inordinate sum of money courtesy of their billionaire owner Farhad Moshiri last summer on players that have yet to provide a return, barring the notable exception of Jordan Pickford.

Davy Klaassen has reiterated his determination to make a success out of his £24m move from Ajax a year ago, while the hope is that Theo Walcott and Gylfi Sigurdsson can build on promising moments last season to produce the level of consistency needed to challenge for the European spots.

News of Everton’s hands-off message to Leipzig over Lookman comes in the same week that the club have underlined their position on Mason Holgate’s future, with the defender seen as an important member of the first team squad.

The sale of Funes Mori and advancing years of both Ashley Williams and Phil Jagielka mean that Holgate is expected to feature more in his preferred position of centre-back, but restructuring the defence is at the forefront of Silva’s plans.

Michael Keane experienced a difficult first season following his £30m move from Burnley, but Pickford’s exploits for England at the World Cup could prove a vital bargaining chip for potential defensive targets this summer.

The signs are that going forward, Everton will need the raw pace and goal threat of Lookman, whose mistreatment from Sam Allardyce was one of the early signs of distrust between fans and their old manager.

His impact off the bench in the FA Cup third-round encounter with Liverpool was one of the few positives to draw from the 2-1 defeat, but after Allardyce had dismissed reports he would be loaned out last January, he insisted on being allowed to sample regular first-team football at Leipzig.

Lookman seemed to be spurred on by Allardyce’s disrespectful comments to the media on the matter, becoming an integral part of Ralph Hasenhuttl’s side that finished sixth in the Bundesliga.

Five goals and three assists in 11 league matches tells its own story, and Silva is keen to see how Lookman reacts to the reported £12m bid being rejected. He should have more opportunities under a manager who relishes attacking football.

The pathway to more minutes is being cleared. Mirallas is likely to be sold while Yannick Bolasie has been linked with a move to Turkish side Fenerbahce after a disappointing return from injury.

The winger made an encouraging start to life at Goodison Park, linking up well with former striker Lukaku, but a serious knee injury has taken away the player’s most valuable asset, and pace is what this Everton side need. 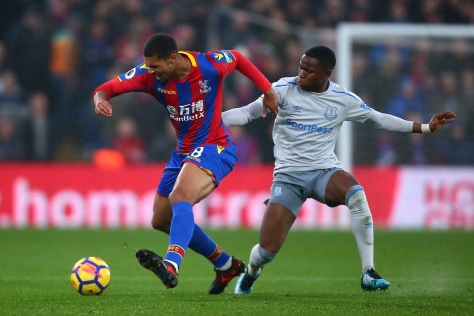 There were rumours Silva would look to prise Richarlison from Watford even before he was confirmed as the new Everton boss, but Lookman now deserves his chance to make the left side of the three behind a striker his own.

Director of football Marcel Brands has quietly gone about his work during his first month at the club, and the Dutchman has previously spoken in glowing terms about how much he values Lookman’s technical qualities.

He tried to sign him whilst as sporting director at PSV Eindhoven when Lookman was still a Charlton player. Everton are yet to make a signing under Silva but keeping hold of the 20-year-old could prove to be the shrewdest piece of business this close season.

Having taken his chance at Leipzig, Lookman must now do the same at Everton.

Everton are in talks with Bundesliga club Hertha Berlin over the signing of defender Marvin Plattenhardt, but who is he and what would he bring to the club?

The German full-back is currently preparing for the World Cup, but the Blues are keen to push through a deal before a ball is kicked in Russia.

Put simply, Everton are in desperate need of a left-back. They’ve needed one to provide Leighton Baines with competition for several years, but previous managers have opted to strengthen elsewhere.

David Moyes and Roberto Martinez both used centre-halves Sylvain Distin and Antolin Alcaraz to cover the England left-back during rare moments of his absence through injury, while Luke Garbutt convinced neither that he was an able deputy.

Ronald Koeman’s problems only really started to surface after his refusal to act on what appeared patently obvious to fans last summer when he brought in right-back Cuco Martina on a free transfer, convinced he could operate on the opposite flank.

New boss Marco Silva is keen to avoid the same pitfalls, and while talk of Baines’ departure in order to free up transfer funds has proven inaccurate, it is high time the club began preparing his successor after 11 seasons at the club.

Bristol City’s Joe Bryan was linked with a move to Goodison Park while Sam Allardyce was in charge, but Silva has been sounding out his own targets and Plattenhardt could be his first signing since being appointed this month.

Everton’s new director of football Marcel Brands has been tracking the Hertha Berlin man for the past few seasons while in his role at PSV Eindhoven, and it has been swiftly agreed that the left-back deficiency at Finch Farm should not be fixed from within.

Antonee Robinson earned his first senior call-up with USA after an impressive season on loan in the Championship with Bolton Wanderers – playing in the 1-1 draw against France last week – but he is not yet ready to make the step up in class to Premier League level.

Plattenhardt is not someone who is overly reliable defensively, but his attacking instincts down the left would complement the runs of Seamus Coleman on the opposite flank. Everton were at their best last season when Baines returned to bring balance to their attacks, and it is what he contributes going forward that has attracted interest.

With six caps for Germany to his name, he is battling it out with Jonas Hector to be selected as the national team’s first-choice left back at the World Cup, and as such, he represents a more experienced target than Celtic’s Kieran Tierney, another named linked with a move further south.

Everton will have scouts out in Russia to watch Joachim Low’s opening game against Mexico in Moscow on Sunday hoping that Plattenhardt gets the nod, and the 26-year-old is equally adept playing at wing-back should Low opt to play a three-man defence.

Silva’s preferred formation is 4-2-3-1, but it is the player’s willingness to get forward as well as providing a lethal free-kick delivery that has caught his eye.

Plattenhardt scored three set pieces during the 2016/17 season, contributing a team-high seven assists during that campaign as Hertha finished sixth, but the club could only muster a mid-table finish last term.

He still managed to provide eight assists for his club, and it is this creativity that has drawn interest previously from Watford. With his contract at Berlin running until June 2023, it may take a significant fee to prise him away from the Bundesliga.

Plattenhardt remains one of the least well-known of the 23-man squad for the reigning world champions, but Silva is aware that should he become Germany’s first-choice left-back at the tournament, his price tag is only likely to rise. Everton want to strike a deal with Hertha before the tournament gets underway.

His confident manner with the German media and stylish appearance suggests he could become a cult figure on the blue half of Merseyside.

Everton improved significantly after Baines return from injury following a three-month lay-off, but Plattenhardt would not be put off by arriving at Goodison in need of fighting for his place in the team given his battle with Hector at international level.

He told Sport Bild: “If you believe what you hear and read, then Hector is set in stone and I’m his back-up. But I’ll show everything in training so my team-mates know they can rely on me. 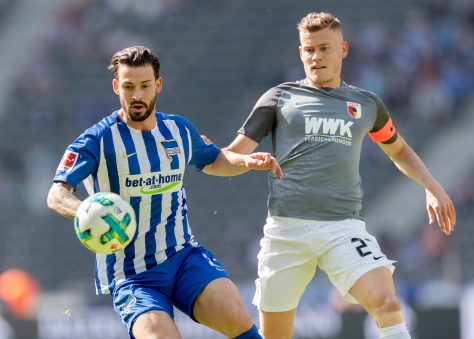 “Of course, I want to play. It wouldn’t be nice to head home having not played.”

Having surprised many back in Germany, but not himself, in surviving the cut from 27 players to 23, the former Nurnberg defender may relish the opportunity of becoming the long-term replacement for Baines.

Having missed 15 games with a calf injury, it’s imperative that the 33-year-old is provided with cover, and aged just seven years younger than the Everton icon, Silva may look to Plattenhardt as a ready-made replacement.