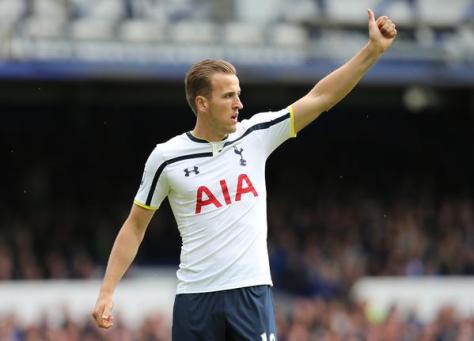 It was a fitting end to the season for both these sides. The hosts, Everton, entered the season full of promise but disappointed their fans once more, deservedly losing to slicker opponents, who looked determined to put right the sense of ennui that has pervaded them ever since their faint Champions League hopes were extinguished upon the blooming of spring.

It was fitting for Spurs that a season that has tailed off somewhat ended with a game won by the man that has plunged 24 points on his own for them, more than any other player in the top flight. As Spurs have appeared to be collectively on their travels for weeks, Harry Kane has endured a goal drought by his standards.

His cool finish to cap a resounding win at St James’ Park aside, Kane has looked in need of a rest before the European Under-21 Championships in the Czech Republic ever since his debut in March for the senior squad.

But he looked back to his best at Goodison, heading in his 31st goal of the season midway through the first-half to give the visitors a lead they deserved and managed to hold on to with greater ease than the scoreline suggests.

Of even greater satisfaction to Gareth Southgate will be the performance of Eric Dier at full-back, whose cross enabled Kane to rise above Phil Jagielka to nod home the winner.

Whether Dier is used alongside Jagielka’s teammate John Stones as a centre-half in the tournament remains to be seen, but his accurate assist here capped a first-half performance full of running that will strengthen his case for inclusion, especially with service as good as this for Kane.

If the pair were the clear positives from an afternoon high of tidy Tottenham possession, but short on notable incident, the toil endured by a disjointed Ross Barkley most certainly represented a note of overarching concern.

Barkley is not Southgate’s problem this summer, but his ineffective, erratic 45 minutes before being hooked was another cameo of the nation’s longer-term unanswered conundrum.

It was further evidence of his need for a rest. Barkley has shown himself to be a fine prospect, with the build of a boxer and feet of a ballet dancer, but his season has unraveled in fits and starts at best.

One pass measured dangerously to the opposition here, another fizzed unnecessarily into the belly of the young full-back Brendan Galloway there, this was further proof that Barkley has found his inhibitions, when his contemporaries on the continent are shedding theirs.

If Barkley did too little to impact the game, Kevin Mirallas was doing too much, at one point tracking back to regain a ball he would lose inexplicably when dribbling towards his own goal.

It was typical Mirallas, but in truth it was only he who looked like scoring for Everton on an afternoon when Hugo Lloris’ goal was excellently marshalled by Jan Vertonghen and Fazio.

On three occasions in the first-half, Mirallas found himself looking at the whites of Lloris’ eyes, but only once did he force the Frenchman into a save, in the first of his duel, when he telegraphed his shot when put through by Barkley.

It was a costly miss, as Kane pounced shortly afterwards for his 21st Premier League goal of the season after 24 minutes, mirroring a club record set by Jurgen Klinsmann and equalled by Teddy Sheringham and Gareth Bale. 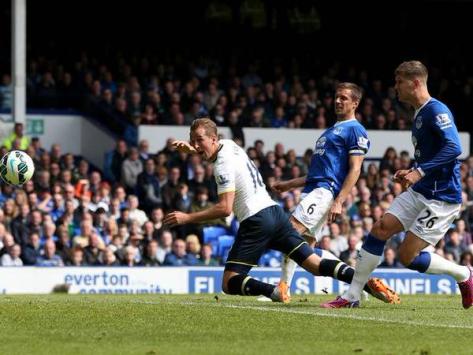 Kane guides his stooping header into the corner after 24 minutes

Mirallas nearly made amends when he neatly set himself up but sent his half-volley inches over, and the Belgian then latched onto Galloway’s pass but having been forced wide by the grounded Lloris, he lifted his hooked shot onto the roof of the net.

Seamus Coleman then arguably had Everton’s best chance of an equaliser in first-half injury-time, but his angled shot was tipped clear by Lloris, whose shirt-throwing at the final whistle suggests he could be on his way this summer.

Spurs were the better side, and despite Mirallas’ three openings, few inside the ground could argue with the result, especially after Roberto Martinez decided to withdraw the winger with 20 minutes remaining.

Seamus Coleman is closed down by an impressive Nacer Chadli

Moussa Dembele was an imperious presence before being withdrawn himself early in the second-half, the slippery Christian Eriksen provided the Everton defence with constant questioning while Nacer Chadli, playing the game as ever in his slippers, looks set to build on an impressive second season at White Hart Lane.

The quality of Tottenham’s possession was a feature of a game that will not live long in the memory, but while Ryan Mason was happy to control the gentle tempo, Everton never looked like being able to conduct anything themselves.

The Toffees have a squad full of isolated pieces that on this evidence look a tired, tentative outfit in need of reconstruction. Where Nabil Bentaleb showed his strength and versatility – deputizing for Danny Rose at left-back – to form part of a fluid system that played without pressure, Everton did not look like they were enjoying themselves beyond the light relief of being inundated regularly with Liverpool’s deepening woes at the Britannia Stadium.

There were too many heads down, and half-hearted clapping of poor balls when really what there ought to have been was a clear game plan to eradicate the glaring gap between the isolated Romelu Lukaku and a midfield that constantly conceded possession and were never in the right place.

The Spurs players salute their fans at the final whistle

Galloway emerged from an uncertain opening 45 minutes with a great deal of credit after the interval, but there were very few straws to be clutched at for the hosts.

The slow pace of Everton’s play has often been levelled at them this season, so you can imagine what a meaningless game to end a forgettable season would offer.

Passes trickled, throw-ins were fouled and extra touches were seized upon by a side with marginally more to play for, a Europa League group stage place given Spurs’ attainment of fifth – one position higher than last season.

While Mauricio Pochettino will take a degree of satisfaction from that improvement in his first season in charge, the ill-discipline shown by Steven Naismith towards referee Jonathan Moss just about summed up a frustrating day for the Toffees, extinguishing any hopes Martinez had of avoiding a heavily anti-climatic lap of appreciation.

Steven Naismith came on for Mirallas but offered little

The only genuine sense of gratitude on show came with 10 minutes remaining when Sylvain Distin was given a token cameo on his last appearance after six years’ service.

The French defender was given a rousing send-off by a sell-out crowd starved of quality, but his departure is one of several issues Martinez will need to address in the coming months if his unswerving optimism is to avoid coming under intense scrutiny.

Three defeats in the final four games checked a run of five wins and a draw to remind Evertonians of the bleak winter that derailed a campaign and perhaps act as a warning of the bleakness that lies ahead.

Twelve months ago, the Merseyside club were celebrating their highest Premier League points tally, but the current crop look a shadow of the same squad that attained those 72 points.

Everton’s inability to juggle the demands of both domestic and European football equated to being 25 points down on last season, consigning them to the Premier League’s bottom half for the first time in nine years, and it is by no means a certainty that finishing eleventh will be a dose of one-off mediocrity.