Perhaps only now will the alarm bells start to ring. The sound of the final whistle at the KC Stadium and news of QPR’s landmark victory at Sunderland confirmed a new low in Aston Villa’s dismal season, their downward spiral from early-season pacesetters to occupants of the bottom three compounded by defeat in Hull.

The Tigers looked toothless in the absence of Nikica Jelavic in a chastening January, but the return of the Croatian striker alongside their £3million purchase Dame N’Doye has breathed new life into Steve Bruce’s side. The duo were the chief tormentors in Villa’s latest tale of woe, which now amounts to just two wins in 21 games.

These were a critical three points for Hull, whose confidence emanated from a fully deserved point at the home of the champions three days earlier. Bruce had yet more job speculation to address ahead of the game, but as the pressure will have eased on his own future after only his side’s third home win of the season – which lifted them above the dreaded dotted line for the first time in a month – so it will have mounted on his opposite number.

Paul Lambert admitted as much, describing his dressing room as ‘flat as you’ll probably get it’, but the hardened souls that made the trip up North were not so sedate in their despondency, unfurling a banner as cold as the Humberside air demanding his dismissal as manager.

Winter of discontent: little has lifted the gloom for Villa fans and a nervy three months lie ahead.

The Holte End residents proclaim themselves ‘the 12th man’, their posters pointing the way to goal in defeat to Chelsea, but their self-deprecation is now beyond parody, their mood increasingly apathetic, their own Endgame staring motionlessly at the trapdoor to the Championship.

Randy Lerner admitted to wanting to sell the club last summer, but insists he remains engaged with his duties as the club’s owner, while chief executive Tom Fox recently offered words of support towards his beleaguered boss. But the renewed calls for a late managerial change, and the recent examples where fresh ideas have given clubs an upturn in fortunes, will have registered with those in power.

The pressure coming from outside the boardroom walls has steadily increased on Lambert ever since he signed a new five-year contract last September. One would be forgiven for thinking the relative ease with which a side boasting the Premier League’s worst home record consigned him to a 50th defeat in 101 games under his stewardship would severely test his unswerving belief in survival.

But to his credit, the Scotsman spoke bullishly last night, earmarking his side’s remaining fixtures as ‘13 cup finals’. “They are the biggest games of the players’ careers,” the 45-year-old admitted. “I still believe 100 per cent that the football club will be fine and will stay up. We’ve been trying to play in the right way but now is the time to win ugly.”

“We’re in a fight and we’ve all got to stand up to get ourselves out of it. The mood in the dressing room is as flat as it could possibly get. Everybody’s going to have to show character from me right down.” 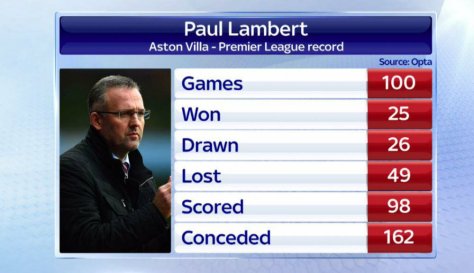 Figures of the Freefall: the Birmingham Mail called for Lambert to be sacked on Wednesday, and the stats support a lack of progress.(Source: Sky Sports)

Lambert arrived at Villa Park in June 2012 buoyed by back-to-back promotions with Norwich City and fresh from a respectable campaign in the Premier League. Despite the brave face, his appearance has become increasingly fraught, as fans’ patience has waned in his credentials.

Pinpointing method in Lambert’s reign has been part of the problem (the Roy Keane episode only serves to accentuate the point). His insistence on a youth-based strategy in the first two seasons may have only brought occasional shoots of vindication, largely in the form of Fabian Delph, but nor did they flirt overtly with any notion of relegation.

Lambert called for patience but his transfer policy last summer suggested a different tack – one that appeared to admit his own faculty for bringing the talents of his squad to fruition would not be fully realized. Experienced heads were brought in with detractors forewarning a ‘batten down the hatches’ job lay ahead.

New recruit Carles Gil has added much-needed impetus going forward – Lambert will hope his punt on Scott Sinclair will also pay dividends – while the recently signed deal to keep Delph at the club can at least be viewed as having prevented him from leaving for nothing at the end of the season.

Yet it would appear that the race to avoid the drop will come down to a shoot-out between strikers at the respective strugglers, with Villa currently in the bottom three only on goal difference.

With just 12 goals, no side in Europe’s top five leagues has scored less than the Villains. Indeed, the only team in top-flight history to score fewer goals after 25 games was Leicester (11) in 1977/78 – and the narrative of the next six teams in the Premier League era to have fared marginally better all ended with relegation.

Never has the need for Christian Benteke to rediscover his potency in front of goal been so desperate.

The farmed-out Darren Bent’s continued resurgence under Steve McLaren at Derby County will not have gone unnoticed by the Villa faithful, and with Libor Kozak’s date of return from a broken leg still unknown, Rickie Lambert’s decision to stay at Liverpool on transfer deadline day may well prove extremely costly.

Some Villa fans have taken to local phone-ins to voice their belief that a season of rebuilding in the Championship, after several years of sleepwalking in the top flight, is required; a reality shock from which the club will emerge stronger.

Given the club’s history and huge fan base, they argue, it would be hard to envisage a lengthy period outside of the elite were the worst-case scenario to occur – but supporters of Leeds United, Nottingham Forest and Sheffield Wednesday will tell them that this should never be counted on.

Lambert will hope that this weekend’s FA Cup Fifth Round tie with bitter rivals Leicester will provide the necessary fillip, against a manager similarly under-fire and with more pressing issues than holding onto vague hopes of silverware.

What is for certain, whether Villa manage to pull themselves clear of trouble or not, a pivotal summer of upheaval must occur, starting at the top.