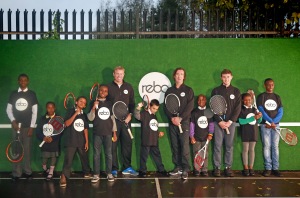 No membership required: REBOwall has taken tennis out of traditional environments, and placed it firmly in the heart of Hackney.

Adrian Hutchins founded the concept geared at making tennis more accessible to inner-city children last year, and Petchey was visibly encouraged by the enthusiasm engendered within the 8-10 year-olds who were present to try out their new toy.

“It’s pouring with rain, but the kids are having fun,” Petchey, 44, told me. “You can still see a smile on their faces. Every time kids are given a goal, you see them coming together and wanting to do better. It’s a positive environment, as you see light in the eyes of the kid who at first couldn’t hit the ball being able to connect with it.

“It doesn’t take long when you’ve got a practice partner who is not going anywhere to get better. You only need one ball, one racket and you can play for hours on end. That isn’t a huge cost.”

Eight local kids who had never picked up racket before joined Petchey and Hutchins on the day REBOwall was installed at the Concorde’s playground, and Petchey believes it will galvanize more first-timers to come forward, free of any financial excuse.

“One of the things that I don’t think we’ve done well in this country is introduce kids to the sport, and it’s a bigger issue as to how you can retain them,” Petchey continued. “This is a very functional, relatively inexpensive way for kids to have access to tennis in the rain or whenever you want, hitting balls against the wall, and potentially igniting a passion for the sport. More importantly, you can have kids burning off energy doing something productive.

“I watch a lot of tennis coaching lessons – my kids both play – and the one thing I’m big on is hitting tennis balls. I see a lot of talking, a lot of picking balls up and group sessions where you hit one ball ever four. I question how much fun a kid is having. Kids don’t want to stand in a line, so the more you can have a situation where they can hit the ball, the better.”

Petchey insisted that all the very best players, including Rodger Federer, Jimmy Connors, Caroline Wozniacki and Novak Djokovic all started by using a rebound wall, with its large surface area enabling them to improve ball control and footwork from a very young age.

Founder Hutchins is delighted to have someone of Petchey’s standing within the game on board to promote tennis in a non-traditional environment and believes the creation of a wall that provides a natural upward ball trajectory is only the start for his brand.

“This is a genuine tennis REBOlution,” Hutchins enthused. “The most exciting element of the launch is being able to expand it out into parks, playgrounds, communities and areas where you can’t put a tennis court. You can put one of these into a car park, under a railway arch, under a fly-over and start offering lessons.

“Someone of Mark’s experience will hopefully be very inspiring to the kids here. He brings a lot of kudos to the brand, and as he himself grew up using a rebound wall, he immediately bought into the idea.

“Some academies in America won’t let their juniors onto the tennis courts until they’ve had six sessions on a rebound wall. This makes them instantly accurate, their footwork and contact with the ball instantly improves. Once you translate that onto a court, you’re already a better tennis player because you understand what it feels to hit a tennis ball from the middle of the racket.”

The Concorde Centre, which is part of Hackney Council’s £5 million investment to improve facilities for young people in the local area, offers sports and healthy living facilities and allows children to take part in sports such as tennis, basketball, trampoline and badminton five days a week.

Mark Petchey was speaking at the launch of REBOwall’s national campaign to make tennis more accessible to inner-city children. To find out more visit REBOwall.com