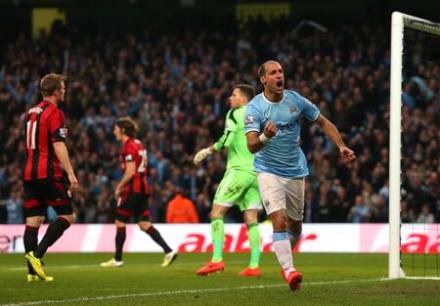 Manchester City kept their Premier League title aspirations alive as their trio of Argentines increased the pressure on relegation-threatened West Bromwich Albion at a subdued Etihad.

City’s reluctance to make Liverpool’s title tilt a procession was more convincing than derisory chants of ‘stuck with Moyes’ as Manuel Pellegrini’s side moved to within six points of the champions-elect.

Pablo Zabaleta, Sergio Aguero and Martin Demichelis were all on target during an entertaining first half in which Graham Dorrans had given the visitors hope at 2-1.

With a game in hand over Brendan Rodgers’ Reds, the Citizens will hope Chelsea derail the Merseysiders at Anfield this Sunday, and for more routine games such as this, against a side who remain three points above the drop zone.

Only three minutes had elapsed when Zabaleta notched his first goal since January 2013, heading past Ben Foster after Aguero’s initial effort was saved.

City doubled their lead when Aguero, on his first start since December 7, scored his fourth goal in five games against the Baggies, cutting inside Morgan Amalfitano before unleashing a 25-yard drive beyond Foster.

Not to be undone by their star-studded counterparts, nor dejected from conceding two goals inside 10 minutes, the visitors halved the arrears on the quarter-hour mark.

Stephane Sessegnon and Matěj Vydra combined to set up Dorrans, who stepped inside Gael Clichy and drilled his shot past Joe Hart.

Ten minutes before the interval, Demichelis restored City’s two-goal advantage, tapping in after Samir Nasri’s corner was flicked on by Vincent Kompany.

Pellegrini will hope David Silva’s injury sustained in an uneventful second-half will not exclude the Spaniard from this weekend’s trip to Crystal Palace.