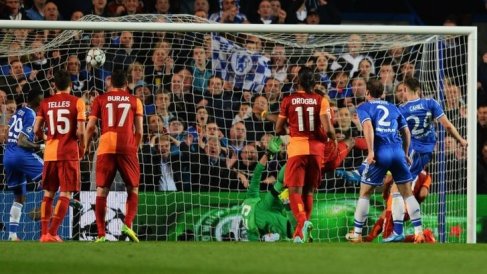 There was no happy return for Didier Drogba, as the former Blues striker endured another frustrating night against his former team mates.

Chelsea, searching for a third European trophy in as many years, were in front after four minutes – eclipsing the speed at which Fernando Torres handed the Blues the lead in Istanbul a fortnight ago.

Eden Hazard released Oscar down the right and, when the Brazilian caressed the ball into the path of Eto’o, his powerful shot took a slight deflection on its way beneath goalkeeper Fernando Muslera.

It was the Cameroonian’s 30th Champions League goal, moving him into the all-time top 20 European Cup scorers, and settling nerves within the home side of becoming the third English team to exit the competition in the last-16.

Jose Mourinho’s side showed no signs of sentiment towards the returning Drogba, who was every bit as peripheral as in the first leg, with little more than an erratic bicycle-kick to show for his efforts.

The visitors, beaten at FC Copenhagen during the group stages, arrived in West London without European pedigree on their travels, and were nearly two behind when John Terry volleyed a yard over the bar from Frank Lampard’s set-piece.

The Turkish outfit were not so fortunate with three minutes of the half remaining, as Cahill blasted high into the net after Muslera had parried Terry’s initial header from Lampard’s corner.

Roberto Mancini’s side contributed little to a disappointing second half, and with Wesley Sneijder subdued, there would be no repeat of the three goals scored in 15 minutes by the Turkish champions against Mourinho’s Real Madrid last April.

Willian brought a sharp save from Muslera, and the keeper due to face England in Brazil had to be at his best to deny Hazard and Fernando Torres in the closing stages.