Romelu Lukaku scored twice, as Everton moved into the top four with a 3-2 win over Newcastle.

A scintillating first-half display saw the hosts go into the interval seemingly coasting at 3-0. But an overwhelmed Newcastle emerged for the second-half invigorated by a double substitution, as goals from Yohan Cabye and Loïc Remy left the hosts holding on for the three points.

In the first-half, Lukaku showed once again precisely what his parent club Chelsea appear to be missing in their quest for silverware this season, as his brace was coupled with an assist for Ross Barkley in what was a brilliant individual display.

Yohan Cabaye gave Newcastle hope with an exquisite finish early in the second period, and Loic Remy added a second in the 89th-minute, as the visitors came away ruing their first-half display.

Right from the first whistle, Lukaku was causing havoc for the Newcastle defence. A smart interchange with Barkley saw the Belgian forward find the net, only for the linesman’s flag to be raised for offside.

Everton, and Lukaku, were not to be denied from capitalising on their bright start however, as moments later, the home side were ahead.

The striker, who scored 17 Premier League goals whilst on loan at West Bromwich Albion last season, has taken to his new surroundings extremely well, having made an instant impact in the enthralling 3-2 comeback win at West Ham last week, and it was he who won the initial aerial challenge with Coloccini that would eventually result in him opening his Goodison account.

The bustling centre-forward fed his fellow Belgian counterpart Kevin Mirallas down the right-side, and the winger used his pace to out-strip Santon and produce an incisive low-driven cross back into the path of Lukaku, whose first-time shot was too powerful for Krul.

Barkley then cracked a right-footed shot that was always veering wide of Krul’s left-hand post, as Everton looked to take the game beyond the visitors. Much of Newcastle’s early endeavour was channelled through Haten Ben Arfa, but he was getting very little change out of Seamus Coleman down the left, and it was a determined run by the Republic of Ireland international that had the Magpies on the back-foot once more.

Newcastle’s defence simply couldn’t handle the physical presence of Lukaku, and the hosts whirlwind start soon resulted in a second goal, with the Belgian at the heart of proceedings once again. Having picked up the ball in the centre-circle, Lukaku found the run of Barkley, who showed excellent composure to direct the ball beyond Krul. 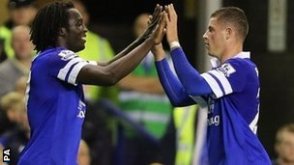 Newcastle were struggling to provide Remy with any service of note. In contrast, Everton were managing to pick out Lukaku at will, and a bad night for Newcastle fans became worse after 37 minutes. Coloccini and Yanga-M’Biwa were clearly already smarting from the damage Everton’s front trio of Mirallas, Barkely and Lukaku had caused them when a long ball over the top by Howard found the pair at odds with each other once more. Lukaku was only too pleased to take advantage of such uncertainty, powering through to round the goalkeeper and lash the ball into the empty net.

The Newcastle players would have had Alan Pardew’s half-time team-talk ringing in their ears as they emerged for the re-start. A slide-rule pass down the channel by Anita found Gouffran, whose first-time effort beat Tim Howard, but not the post. Nothing appeared to be going the way of the visitors.

It would have been indicative of Newcastle’s night had Everton scored a fourth moments later, as Mirallas broke down the right and saw his shot parried by Krul and Osman fail to convert the rebound.

Gouffran teed up his fellow countryman, and the midfielder, who had signalled his desire to leave Tyneside over the summer, unleashed an unstoppable 25-yard drive that looped beyond the outstretched Howard.

Gerard Deulofeu was brought on in place of Mirallas with 20 minutes to go, as manager Roberto Martinez looked to inject life back into the hosts, and while Everton were nowhere near as free-flowing as in the first-half, they produced a gritty second-half display that took the sting out of their opponents.

It was only after Loïc Remy’s instinctive close-range finish with a minute remaining that the travelling supporters began to sense a memorable comeback could be on the cards, but it proved to be in vain, as Everton recorded their third successive win that moves them into the Champions League places and preserves their record as the only remaining side unbeaten in the league.

Martinez was unsurprisingly keen to focus on the first-half display, and in particular the performances of Barkley and Lukaku.

On Lukaku: ‘I thought at times he was unplayable. He will only get stronger. In the second-half at West Ham, he showed us what he can do. Today, he looked like a player enjoying playing, and feeling at home’.

On Barkley: ‘It’s hard to explain how much he’s growing game by game. He’s getting better and better. He’s a good listener, and is quite a unique talent. His awareness of space, his great quality with both feet, and his good understanding with Romelu straight away gives us a good focal point of our attacking play.’

‘The goals were poor. Defensively we have to be better than we are at the moment, for sure. The inconsistencies being shown were disturbing at some points.

There was a better balance in the team [in the second-half], and we came out with a bit of pride and almost a bit more than that. The goals we conceded were too easy, and we have to drill ourselves right [in preparation] for Cardiff.’

One thought on “Everton 3-2 Newcastle United”